The biggest mistake marketers make when starting a creative project

The biggest mistake new clients make is to start a new creative project with the final idea already set. 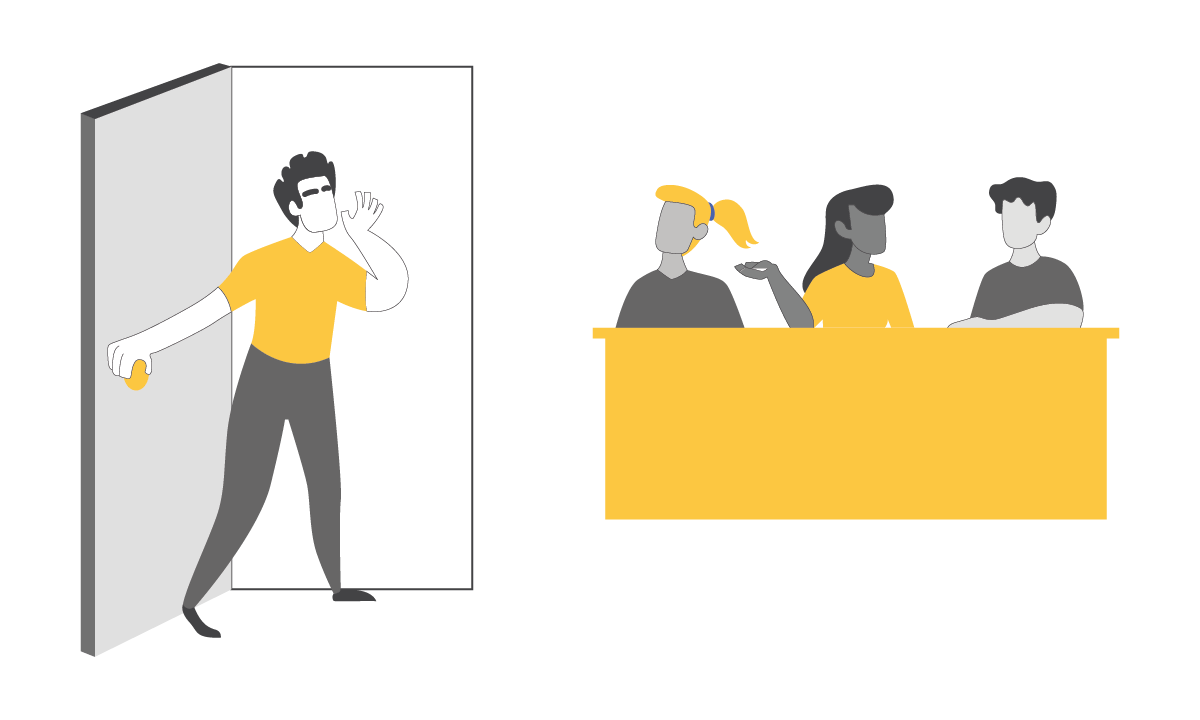 When starting a new creative project, marketers may worry about making a mistake by overpaying or choosing the wrong agency.

What are some issues that arise when you’ve already settled on your creative idea before the project even starts?

For more on each side effect, listen to the episode or read the transcript below.

Guy Bauer: You know, I don't know if I have your intro.

I don't have your intro. Yeah, this will be a special edition. All right, here we go.

Hi, and welcome to Death to the Corporate Video, a show with tips and advice on how to make B2B videos people actually wanna watch. I'm Guy Bauer. Hope is not with us today. Don't worry, she's still alive very much. It's just her daughter has COVID. And so she's got her hands full for the next 10 days.

Don't worry, her daughter's fine. Kids with COVID, podcast. It was a close call, but Hope had to side with taking care of her family. So you're stuck with me today. We're talking about, we're not sure how to title this episode, but maybe here are three possible episode titles.

A big mistake that companies new to video make. Don't make this mistake if you want a great ad. Or stop making this mistake. So we'll see which one we end up going with. But basically this is all about this episode is about a big pitfall we see new clients make and existing ones too, but a lot of companies make this mistake.

They come with a pre baked idea for an ad and what that ends up doing, and I'll go through what ends up happening, the four kind of negative side effects, but this episode is to encourage you to start your engagements with a tabula rasa, a clean slate, because when you come with pre-baked ideas, you may set your, and I would say the odds are more often than not, you will set your project off on a trajectory that is probably not gonna end well for you. Because nine times out of 10 ideas are just that they're ideas. They're good ideas. And God knows I have had many good ideas for things that were not based in any kind of logic or business strategy. They were just ideas.

And actually I impulsively have made, have made Umault ads that were just kind of impulsive ideas. And I have to say that we've shelved 90% of them. We've either shelved them or they were just terribly performing. And while they were good ideas, because they weren't based in any kind of strategy, they didn't end up working.

So let's talk about side effect number one, is that well, think about it. So you have the idea for the ad. Why are you going to a creative agency if you already have it? So if you already have the ad, like why did you hire the agency? And a lot of people say, well, they're the creative ones. Well, then you need to let them be creative.

Otherwise you're shutting yourself off from their creative solves. Cuz a lot of times what you're gonna do is you're gonna have blinders on. And because you're sold on your own idea already. As your agency is doing their due diligence. And maybe even saying that your idea doesn't work or coming up with a better idea, or maybe a tangential idea, again, your blinders are up, you're possibly going to miss out on a great idea that actually is rooted in an intelligent strategy.

So side effect number one is shutting yourself off from possible great concepts from your agency in the first place, because you're gonna have this like pre-baked solution and you're evaluating everything against that solution. And, and well, honestly, a hundred percent of their concepts will fail when compared to your solution if you've already bought your solution in your head.

Side effect number two is, when you come to the table with a pre-baked concept is you will contort any strategy to fit your creative. So even if your agency comes up with a terrible strategy, because you are so set on seeing your idea come to life, you will contort their strategy and kind of backwards logic and back into it and go, yeah, well that fits, you know, you're just gonna try to check that box of strategy to show that you did due diligence and then go, yeah, well that fits with my idea as well. And trust me, how do I know this? Cuz I've done this as well. I've had a really good idea for an Umault ad. It doesn't fit the strategy, but humans can do crazy things with logic. I'm sure you know what I'm talking about and what I did was I tricked myself into believing that my idea did ladder back to that strategy. And, and this is what I'm trying to get at is that when you have that solve in your head already, it kind of clouds the entire process. What you really need to do is when entering a project, tabula rasa, just say that with me,tabula rasa, clean slate, get that out of your head.

And focus on, it's kinda like Bill Belichick, take one week at a time, focus on just the strategy step. Just getting that strategy of who we're talking to, what we need to say, what our competitors are saying so that we don't say what they're saying. We need to be contrarian and correct. Instead of, um, you know, we don't want to be at, uh, what's it called?

Ah, this is where I need Hope. Uh, what is it called? When you're like consensus, you don't want to be consensus. So you need to do all that strategy work, focus on that and not your idea. And, you know, and then once you get done with the strategy, then you can perhaps bring your idea up. But then, you know, be honest with yourself, does it actually ladder back to that strategy?

Okay. So pitfall number two or a side effect number two is you're gonna kind of have a bias, or you'll mentally contort yourself to that any strategy good or bad fits your idea, or you'll be biased toward a strategy that does prove the ideas, right? Either way, you're kind of skipping that strategic step in order to just get to executing your idea.

You have an idea. And you go to your boss or say you are the CMO and you go to the CEO to start this project, and you pitch the idea as the, kind of the lightning strike to get the balls, you know, in motion in your company to get a budget for yourself and get stakeholder approval. Well then, because you've put that in the atmosphere, then you go off and work with the agency and let's say the idea doesn't pan out, it doesn't fit a strategy.

Right. And then you, now you come back to your stakeholder with an idea that wasn't the idea that you pitched originally and your stakeholder goes well, that's not the idea I signed off on. And so even if you do like, have an open mind in the process and come around and say, oh yeah, my initial idea, didn't, you know, doesn't really pan out.

You may have used that idea to get internal approval and everyone was expecting that idea. They weren't actually signed off on the outcomes of the project or, you know, any kind of business goals they were, they were signed off on the idea. So inadvertently you kind of screwed yourself, cuz now it's either you have to choose between, losing the project entirely or just executing, giving the bosses what they want and which then, you know, may later then come back to bite you because it may be ineffective.

So try not to announce ideas in order to get stakeholder approval. Try to get approval on a desired outcome. And, you know, advertising video ads are the way to get there. So this way your stakeholders will also be more open minded when they have to go and sign off on a strategy and an idea, don't get them sold off too early on a concept.

And then. Side effect number four is, and I'm just gonna be honest with you. Sometimes our clients do have good ideas, and even though they weren't based in a strategy sometimes after we do the strategy and we do the creative, we go. Yeah. Your original idea works. Mm-hmm it was a great idea. Makes strategic sense.

Let's do it. Well, I hate to say this, but you kind of overpaid for a creative agency to tell you that. If you are dead set on doing your idea, what I recommend is going right to a video production company and not a creative agency, or go to, like, if it's, let's get out of the video ad world, let's just say it's a website, right?

So instead of going to a creative agency, that's gonna do all that strategy and exploration and mood board stuff. Just go right to a developer or like a designer that has a developer team where they. Where you are acting as the creative director and they're your executors, you know, they're the ones pressing the buttons, the designers, designing to your vision, the developers developing to the vision.

Alright. Well, I mean, that's really it, so to wrap it up, this doesn't have to be limited to video ads, any creative project you're starting come to the table with your agency with outcomes and goals rather than the idea.

Even if you do have an idea, you need to suppress it both internally to your stakeholders and then to your agency as well, maybe have it in the back of your mind. But even if you do like you have to take it one week at a time, Bill Belichick, take it one step of the project at a time. First, the strategy, then the creative.

Again, cuz if you have that creative already in your mind, you're gonna contort and fit a bad strategy to fit it. Or you may actually, if your agency comes up with a good strategy, you're, you're forcing your concept into a good strategy that may not even, you know, they may not mean the same thing or they may not play well in the mix.

So that's it. I hope you have a great week. Hope will be back next time. You won't have this kind of rambling mess. Okay. Yeah. If you want more info, hit us up at umault.com.

We're on all the socials, Instagram, LinkedIn, Facebook, it's all at U M A U LT. Thanks for listening.